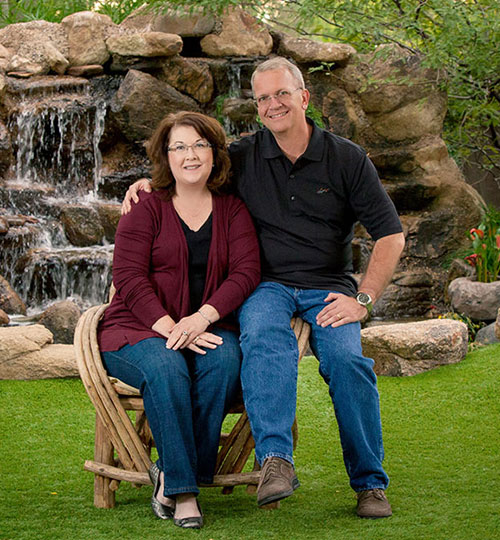 Dr. Mike Sproul grew up in an itinerant minister’s home. As a child he traveled with his mother and father visiting hundreds of churches both in the US and around the world. He came to know Christ at a young age.

Pastor Mike’s family moved from Englewood, CO to Tempe, AZ when he was 12 and it was that year that Mike surrendered his life to full-time ministry. Mike, his parents, and his younger brother and sister began attending Tri-City Baptist Church and Tri-City Christian Academy. Little did he know that one day he would pastor this church.

Through the Christian school, Mike met his eventual wife, the former Elma Phillips, when they were sophomores in high school. She came to know Christ through the ministry of the Christian school as a teen. They graduated from high school together in 1981 and then with their undergraduate degrees from International Baptist College and Seminary in 1985. They were married in June of that year and moved to Philadelphia where Elma taught 3rd grade in a Christian school and Mike attended Calvary Baptist Theological Seminary, graduating with honors three years later with his Master of Divinity degree.

Upon graduation, Mike and Elma moved to Saginaw, Michigan where he ministered as the Assistant Pastor for Evangelism at Community Baptist Church. During the three years there, God blessed Mike and Elma with two beautiful children, Dave (May 1989) and Sara (October 1990).

Mike felt God’s leading to join the Air Force Chaplaincy and on July 15, 1991 he became a commissioned officer. Mike and Elma experienced a great harvest in their five years on active duty, with hundreds of salvation decisions and baptisms, first at Beale, AFB, CA (’91-’94) and then Anderson, AFB, Guam (’94-’96) as well as his Desert Storm deployment. During his time in Guam, Mike graduated with honors with his Doctor of Ministry degree.

Dr. Singleton, the founding pastor of Tri-City Baptist in Tempe, AZ, in conjunction with the deacons, asked Mike to return to Arizona and his home church, leave the active-duty Air Force, to be the successor to Dr. Singleton. After a three- year transition, Mike assumed that role of Sr. Pastor of Tri-City on September 1, 1999. The church had many ministries, Christian School, Bible College, Mission Agency, and Pre-school. Mike led the church to start a School of Music and a Seminary. In 2001 the church purchased property and moved in 2009. The ministry constructed a $30M campus in Chandler to allow growth and expansion.

During these years of being Sr. Pastor at Tri-City, Mike stayed connected to the military as a Reserve Chaplain and then as an Air National Guard Wing Chaplain with the 161st Air Refueling Wing, Phoenix, AZ. He deployed twice, once in 2011-2012 to Qatar and Saudi Arabia, and then in 2013 to Manas, Kyrgyzstan. He was promoted to Colonel and spent 60 days per year, for four years, on the staff of the Commander of United States Air Forces Europe and Air Forces Africa, as well as being the Air Guard state chaplain for Arizona.

During these years at Tri-City, Mike and Elma’s son graduated from the Air Force Academy (2011) and became a KC-135 pilot. Dave has deployed five times, is now married (Ameana) with the sweetest little girl (Eleanor [Ellie girl]) and boy (Theodore) born in the summer of 2021. Dave holds the rank of Major in the United States Air Force.

Sara received her Bachelor’s in Nursing in 2016. She is married (Brandon) and has two beautiful boys (Brayden [Little B] and Bentley [Baby B]) and she is currently working in her field, while studying for her Nurse Practitioner degree.

Elma, Mike’s high school sweetheart, has worked as high school counselor in an on-line high school for the past nine years. She was a bookkeeper for many years for a large literacy non-profit and then became Mike’s Executive Assistant for ten years. She has taught pre-K Sunday School for 27 years as well as led numerous Bible studies for women. Mike and Elma have been married for 36 years.

In early 2019, Mike was chosen to fill the role of Director of the Air National Guard Chaplain Corps in Washington DC. It is the most senior full-time chaplain position in the Air National Guard. It was a very hard decision to leave family and the ministry he led for over twenty years and move to Washington DC, but both Mike and Elma believed this was God’s will in their lives. God greatly blessed their ministry in our nation’s capital, but God never removed the burden for His calling on Mike’s life which is to be a pastor. After two years in Washington DC, Mike accepted the call to become the Pastor at Littleton Baptist Church. Mike continues to serve his country as the Senior National Guard chaplain for the state of Arizona.

Mike and Elma are excited to come to Littleton Baptist Church. They know God has great things in store for this historic ministry! God’s providential hand brought Pastor Mike and Elma to Littleton and they look forward to all that God will accomplish in lives around the world through this congregation over the next few years. They invite you to join them in serving and growing His Kingdom through Littleton Baptist Church.